A Modern Day Parable for Our Churches 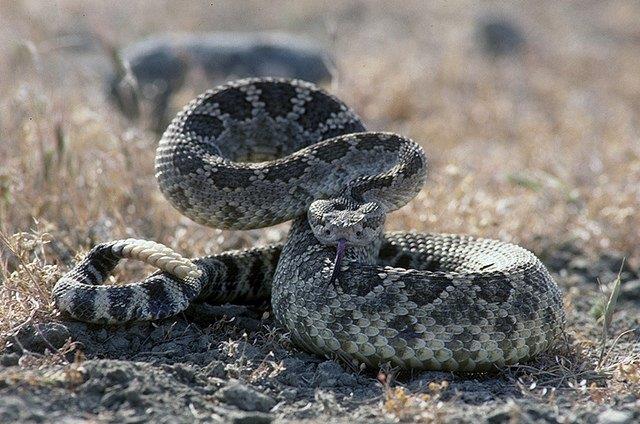 In the latter part of the 19th century, a young couple left their home in Indiana and homesteaded 190 acres of parched, dry land in Arizona. Life was hard, but they persevered, building a home and having two children, a boy and a girl.
One hot summer day, the husband left on one of his periodic trips to town for supplies, he would be gone three days. His wife, Millie, didn’t like being left alone during these trips, but she accepted it as just another of the hardships of their existence. After her husband drove away in the wagon, Millie fed her two children, William age two, and Sally, now four. Then she went out to chop kindling for the stove.

As she lifted the first log off the top of the pile, she heard the rattle at the same time the snake sank its fangs deep in her ankle. The diamondback rattlesnake had been sunning itself beside the woodpile, and Millie had not seen it. She screamed, dropped the log on the snake, and ran back to the house. In the kitchen, she quickly reached for a small, sharp paring knife, lifted her foot onto a chair, and wincing at the pain, made a small incision. As she saw the blood coming out of her body, the terror of the moment began to subside and she sank down on the chair. If this did not work, she knew she would die.

Then it hit her. O my goodness, the children! What would happen to them? They could survive if they had enough food. Sally was mature for her years. She could care for William. There was plenty of milk, but not bread. Millie knew she had to bake for them right now. They could survive on bread and milk until their father returned.

She called Sally into the kitchen and told her what had happened and that in a few hours Mommy might go to sleep and not wake up until Daddy came home. In the meantime, she was to care for her little brother and make sure he had plenty of bread and milk until their father returned. 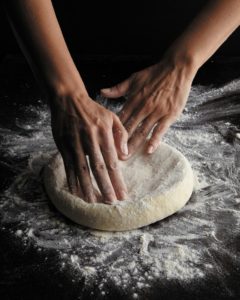 Millie knew she had to build a fire in the stove immediately. So she told Sally to stay in the kitchen while she went back to the woodpile. Fear had left her in the urgency of the moment. Even so, she was relieved to find the snake gone. She began chopping desperately, never stopping. The sweat poured out of her in the hot sun, drenching her hair and clothing. Finally, she had enough wood. She carried load after load into the kitchen until she had filled the woodbox, then she built a blazing hot fire.

For the next two hours, Millie toiled over her hot stove, by now an inferno. The sweat continued pouring out of her. At times, she felt faint…perhaps the poison, perhaps the heat, but she knew she had to remain steady. She had to get the bread baked, because she believed the lives of her children depended on it. Finally, she was finished and the loaves sat cooling on the kitchen table. Millie had lost all track of time. As she began to regain her awareness of what had happened, she gradually realized that by now she should have lost consciousness. Although she was slightly dizzy and weak, she was still conscious.

Millie didn’t lose consciousness. In fact, she lived. But why? The answer is recorded among those mysterious human dramas that occur from time to time when a human being is desperately committed. Millie had worked so feverishly in the intense heat to save the lives of her two children that she literally sweated the poison out of her body.

A while back, Sheryll and I were sitting on the square in Pella minding our own business and enjoying a cinnamon roll, when a member of one of the Christian Reformed Churches approached us with a tape recorder and a camera. He was interviewing random strangers on the street asking them the following question. “When I say the word “commitment”, what do you think of?” My first response was marriage and as answers go, I suppose it was an ok answer. The problem is that I am one of those people that always think of a better answer after it’s too late. What I wish I had said is this: Commitment is always born out of love. The level of our commitment is unavoidably tied to the depth of our love. It is that total commitment, born out of love that keeps a relationship alive and vital.

The parable you just read illustrated that it was Millie’s commitment to her children that saved her. She loved them so much that she was willing to give her last ounce of strength, her last breath, her last heart beat, to insure their welfare and that is exactly what kept her alive.

From time to time in both Churches, I have listened as members discussed their fears about their churches future. While I understand that fear, I don’t share it. I believe our Churches will live as long as they give. Our love of God and neighbor, (which by the way, includes our own members), must be underscored by a radical commitment and a willingness to give our resources. We must be willing to give our time, our energy, our money and even our last breath and last heartbeat, to insure the physical and spiritual health and welfare of God’s children. To do this is to live. To do less, is to succumb to the serpent’s venom. Don’t worry though, I’ve never seen two more loving, or committed congregations.
One last thought and thank you-Every Christmas, for the last several years, Sheryll and I have watched the movie, White Christmas, staring Bing Crosby and Rosemary Clooney. In one of the scenes they sing the song, Count Your Blessings. The lyrics go like this: “When I’m worried and I can’t sleep I count my blessings instead of sheep And I fall asleep counting my blessings”.

I’ve been thinking about the time we’ve had together over the past eight months. And it took no time at all to come to the realization that Sheryll and I have been showered with blessings from the moment we stepped inside your churches. There is no other way to explain it. Every day, hour and minute we’ve spent together with you, has been a good measure of blessings; pressed down, shaken together and running over. We will, for a long time to come, fall asleep counting those blessings.

Thank you for allowing us to serve, 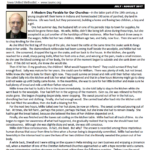